Preparing for the Road Part 2: The $5 Omelette

This summer will be my longest continuous road trip ever. It will also mark a huge lifestyle change as I mentioned in Part 1. I have enjoyed the steady paycheck and benefits that come with military service for close to a decade now, but that will all come to an abrupt end early this summer as I dive head first into the travel and photography world beginning with a road trip across Canada.

With any extended trip, my budget is my biggest planning factor. Lodging, food, activities, fuel…it all adds up. Living arrangements have already been made as I’ll be covered in a Roofnest tent for the duration.  Past excursions have always included paid leave to take my mind off money. Naturally a fairly frugal person with that financial safety net in place, I never had to seriously think about the allocation of every penny as I’m starting to do now. It was no big deal to splurge once in awhile on a $20 pizza topped with locally harvested, glacial water-raised salmon and split a pitcher of beer in New Zealand. When in Mount Cook Village…

But now I’m planning a lengthy trip with no definite end…literally going where the road takes me while pursuing my passion and still paying the bills. As a guy who enjoys eating well, my food budget has become a bit of an obsession lately as I track exactly how much I spend on a daily basis. More importantly, determining how I can cut that cost down as much as possible without sacrificing proper nutrition is what I’m working on. 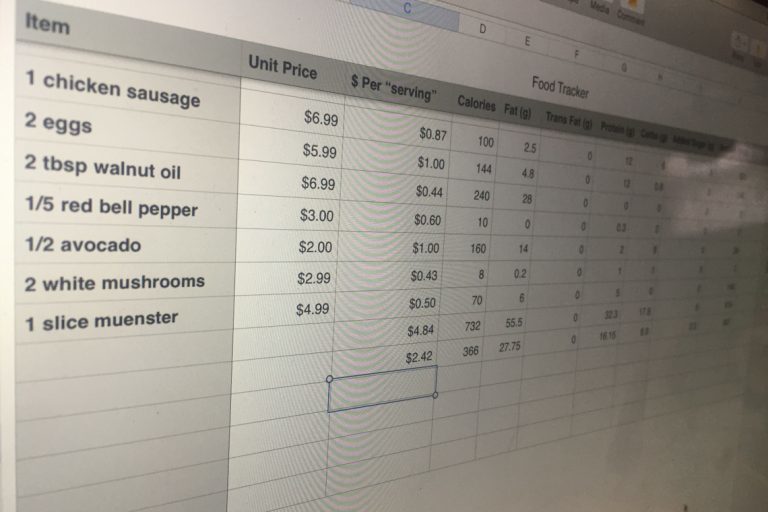 Food tracker for this omelette

My goal is to maintain a well-balanced diet at no more than $20 per day. For a road trip projected to span three months, that equates to nearly $2,000 in just food expenses! Any bit I can save along the way will keep my journey going that much longer.

Cooking for myself is 2-3 times less expensive than dining out, and probably more healthy. I’m no dietitian, but I have a decent understanding of what works for me. That said, I’ve had to cut back significantly on three of my favorite food groups (bread, ice cream, and beer) to meet my goal.

*Late Disclaimer* This is not a food blog. This will not become a food blog. I like food, but I’m not a foodie. Burritos reign supreme and beer is good. Also, if whatever it is happens to be edible, I’ll likely eat it. This post is more about exploring ways to eat well on a strict budget, so if you have recommendations or personal experiences that do not involve the McDonald’s dollar menu, I’d love to keep the discussion going in the comments below!

What I came up with today was a $5 omelette.  Actually, less than that at $4.84 – all without skimping on any ingredients…and intended to be split two ways as part of a meal (yes, I devoured the whole thing minus Japhy’s treat for patiently watching me cook).  But when split, that’s less than two and a half bucks per person! When I think free-range, organic, and/or non-GMO ingredients, I automatically envision a higher price tag. But all of these ingredients are just that – healthy(er) while remaining relatively inexpensive. Below is my breakdown for how to make a killer omelette for less than $5.

First, getcha a cast iron skillet and put some cooking oil in it. I like walnut oil – It’s cheap, tastes good, cooks well, and is loaded with omega-3 ALA. Chop up a bunch of stuff (I used red bell pepper, white mushrooms, and a Bilinski chicken apple sausage) and sauté it on medium heat with some rosemary and thyme, stirring occasionally, until it’s done. My clock for “done” is roughly half a cup of coffee and three songs later, but yours may vary. 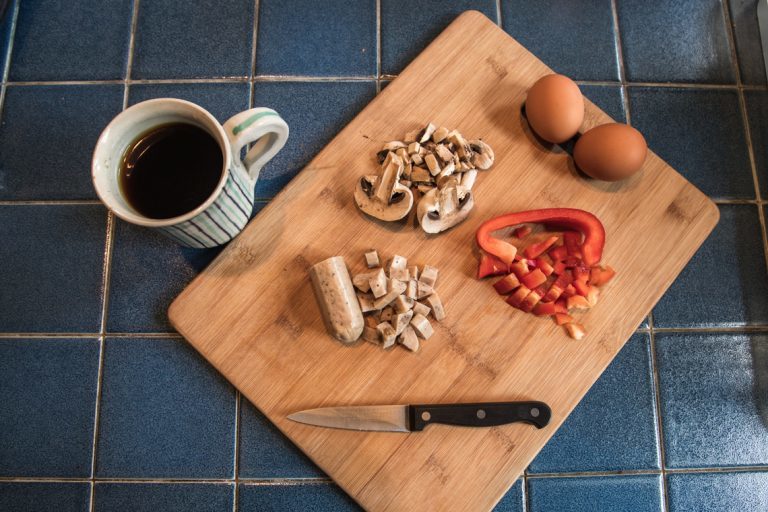 Most ingredients, plus coffee 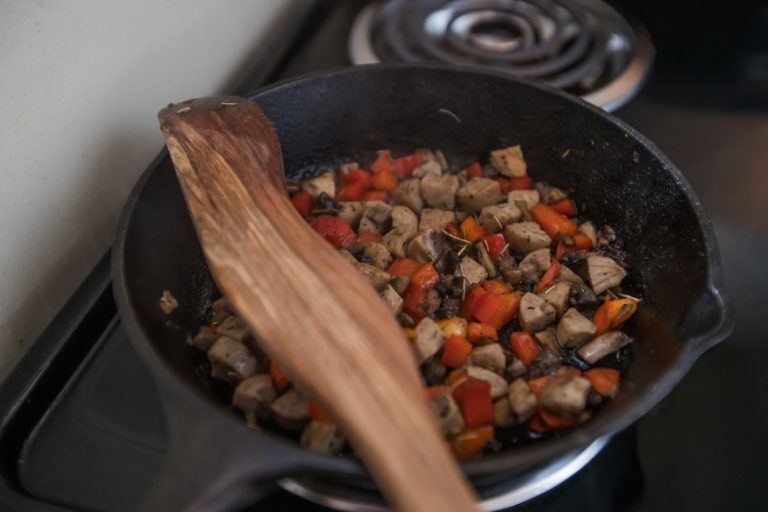 The good stuff in a cast iron skillet at medium heat 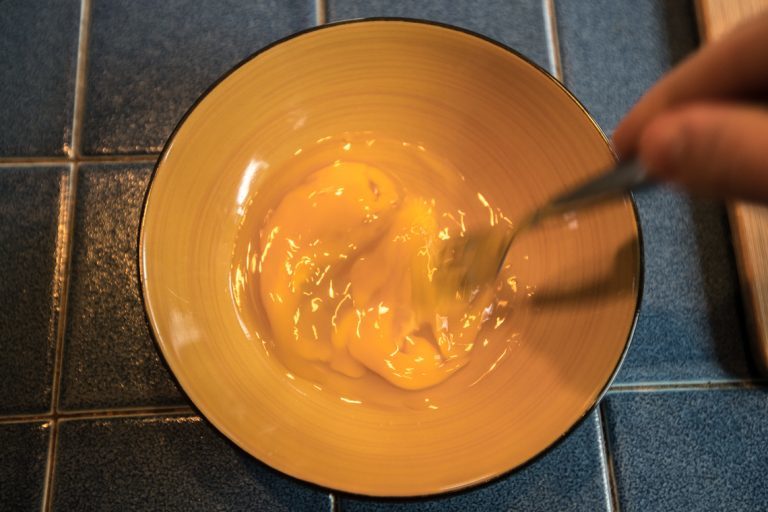 Once the eggs are mixed and your second skillet is heated, pour them in making sure to evenly distribute. Let that sit until the eggs become a bit firm, and then add the rest of your stuff. In my recipe, that was a slice of muenster cheese and the contents of the cast iron skillet. 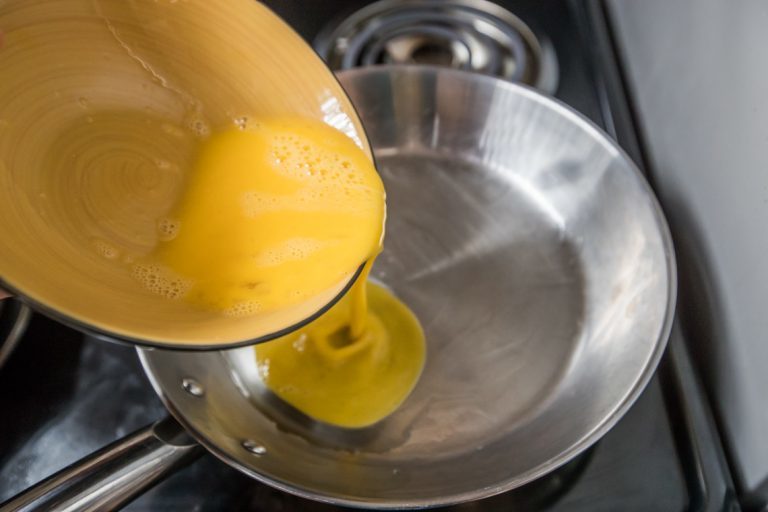 Pour eggs into an oil-coated hot skillet on low heat 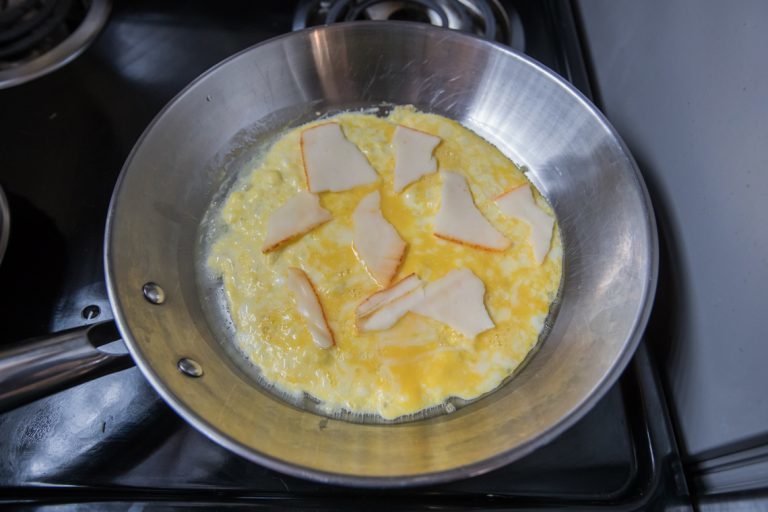 Cheese on top of the cooking eggs 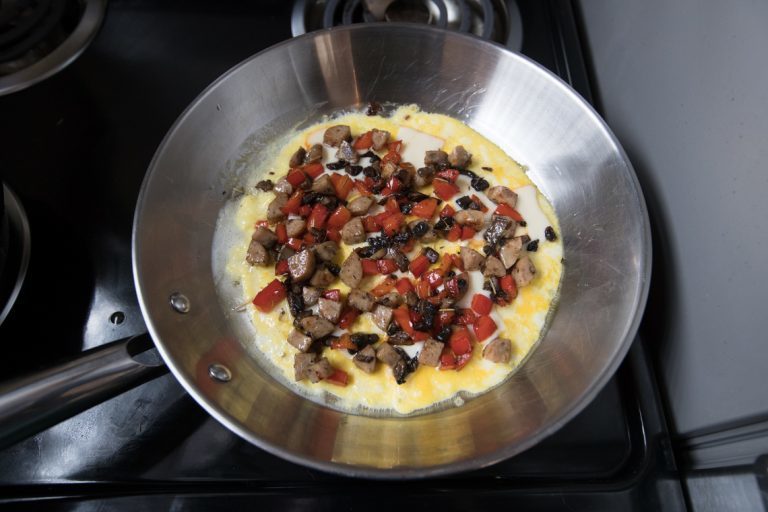 Just about done. Once the eggs are completely firm, fold that layered goodness in half with a spatula (it shouldn’t stick to the pan if you used enough oil and didn’t cook it too hot), slide it on a plate, garnish with whatever (avocados are my go-to), and enjoy – all while knowing you saved a bunch of change on food! 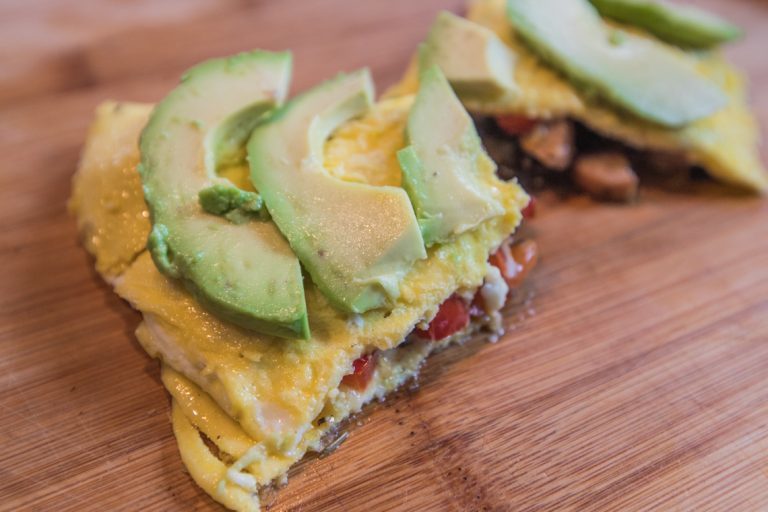 And don’t forget to tip your helper/moocher. 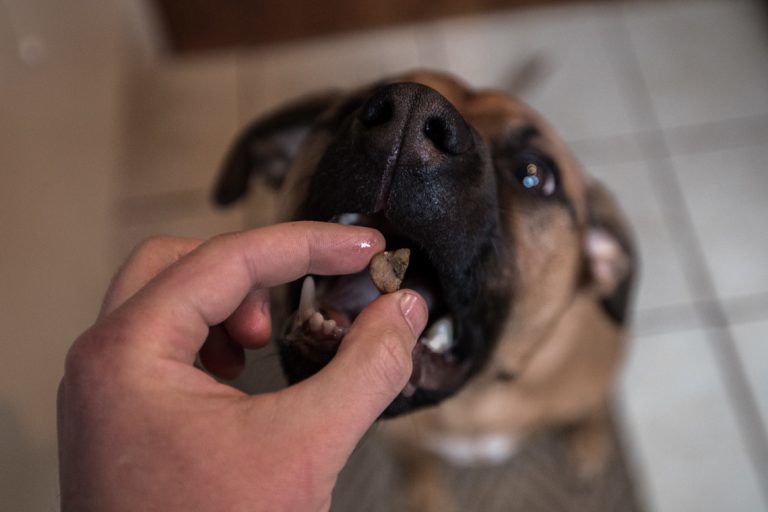 Japhy waited patiently by my side for his bite of chicken

This was the first of many food experiments I’ll be conducting before I set off in early June.  Have any ideas, tips, or tricks from your own travels? Leave them in the comments below so I can learn more!