The age-old story of Lassie saving her boy during his many misadventures comes to mind when I think of dogs and their relationships with humans. Or the bond shared between uniformed personnel and their police or military working dogs. These canines’ intense training allows them to take down assailants and sniff out drugs or explosives. I’m sure you’ve shared your own special bond with a dog, or at least know someone who has.

Now enter Japhy. The king of derpface. He will sit and shake hands at the promise of a treat, but that is the extent of his training. 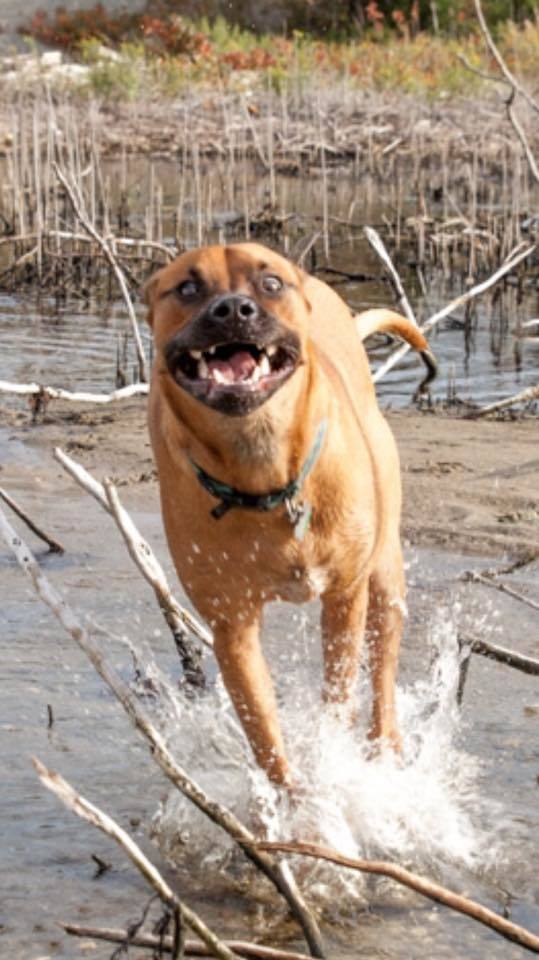 This two-year-old furry boy growls when I move my feet under the covers at night and is frightened by things like cardboard boxes, vacuum cleaners, fidget spinners, and sometimes even his own water dish.  When off leash, he somehow becomes deaf and is possibly more stubborn than me. He is obsessed with licking bare feet…mine, his own, and those of unsuspecting humans alike.

I recently learned Japhy is not the biggest fan of long days on the road, either. When driving around town, he loves to hang his head out the window and watch people and other dogs while sniffing whatever reaches his nose. We just took our first lengthy trip together, however (~2,300 miles in four days), and he was over it almost from the start. At each rest stop or camping location, he’d roll around in the grass for a while and then bounce back to his friendly self. This photo sums up his attitude during those hours in the car, though. 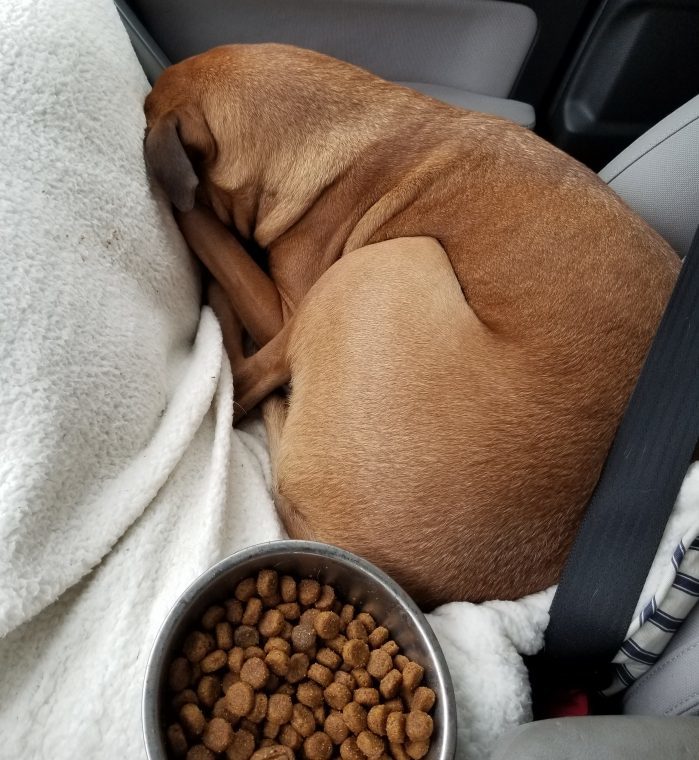 During the late afternoon on day three of our four-day journey from upstate New York to Colorado by way of Washington, D.C., we stopped for fuel in eastern Nebraska outside the small town of York on Interstate 80. I had planned to drive another three hours to get through most of Nebraska before stopping for the night, but the clouds in the distance were far too appealing to view in passing. As a kid who grew up watching Twister many times and being fascinated by storms, I was compelled to stop for a photography break and live out my childhood dream of being a storm chaser, if only for an afternoon. 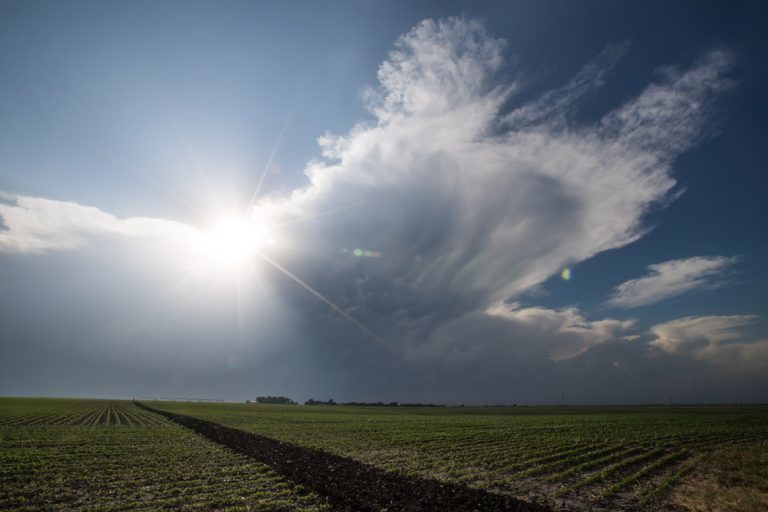 Storm cell moving across a farm in eastern Nebraska

At the fuel pump next to me was a young man filling his truck. “Gonna be a good one,” he said while looking at the darkening sky and alluding to the imminent storm. He sounded like a local as he told me about a tornado that touched down just west of town the day prior. 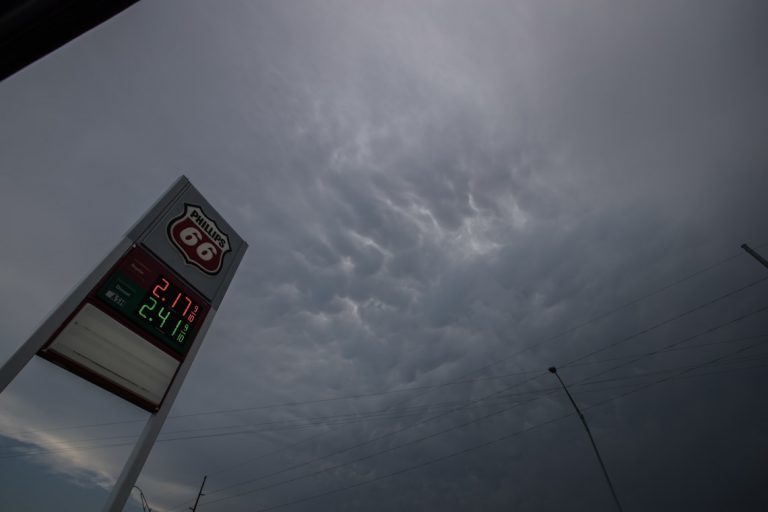 The thought of a tornado once again took me back to my adolescence. I had only seen one twister in real life as it made its way across the landscape southwest of my home in rural South Dakota where I spent nearly a decade. I was in my early teens at the time…after my parents and I had gotten our three dogs – and ourselves – to safety in our tornado shelter, I ran back outside with my camera to shoot a video. The tornado was small and even though it was moving directly toward our house, it was still a quarter mile away when it abated. My parents were not happy with me, but I felt relatively safe and got a cool video to show my buddies on MySpace. Likewise in Nebraska during this highway stop, I felt safe. Hell, I could outrun a tornado in my car if necessary, right?

Japhy and I soon found a picturesque gravel road, pulled over,  and started taking photos of the oncoming storm. Within minutes, some folks drove by asking if we were alright. In the land of Wrangler-clad farmers and ranchers in their big Chevys, Fords or John Deeres, my Subaru and Roofnest were as out of place as my bright colored shorts and Chacos. I can only imagine what they thought at the sight of some hippie laying on the side of County Road 9 taking photos of his dog. It’s all about the angles, man. 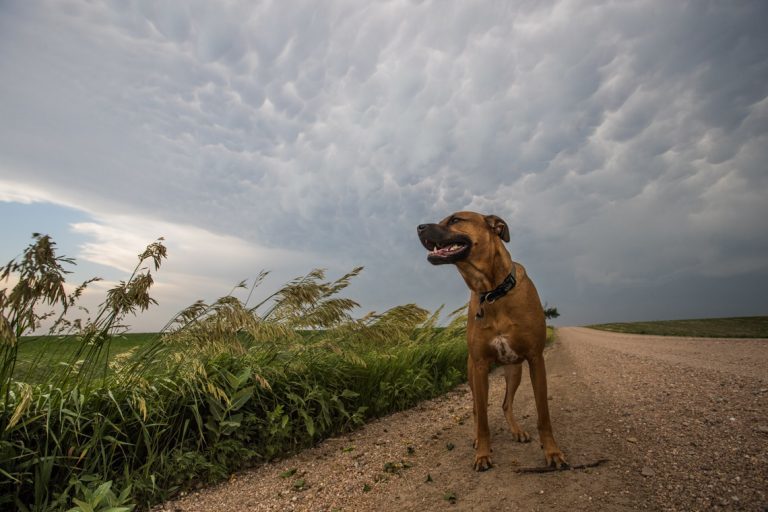 Japhy posing on the side of the road 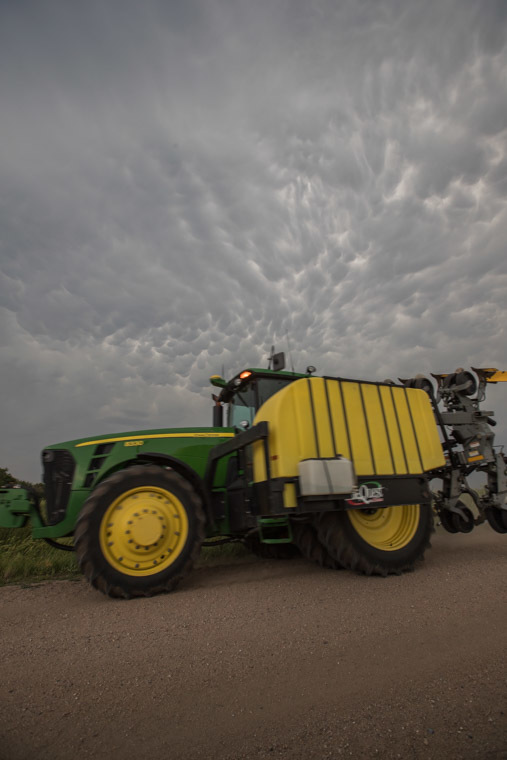 Tractor driving by as the storm slowly approached 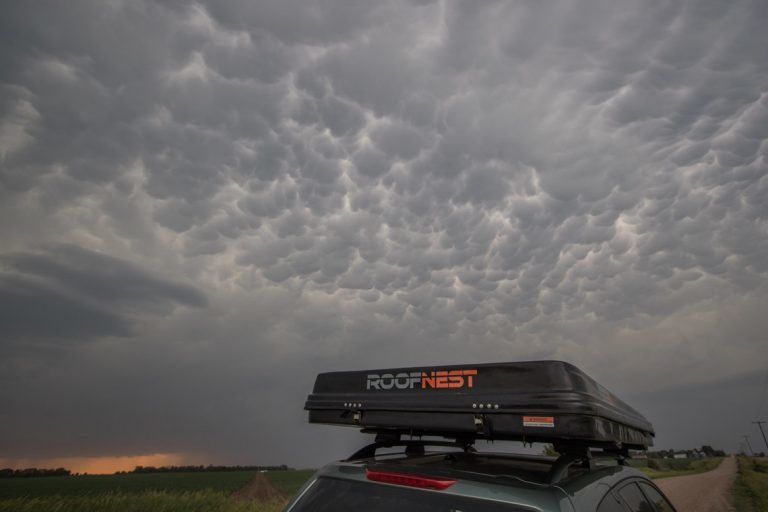 The leading edge of the storm cell ominously crept over us while intracloud lightning lit up the cotton candy-looking mammatus blobs overhead. I could hear thunder way off in the distance mixed with the sound of machinery as farmers continued to bale hay behind me. Japhy was happy to run around and play with old corn cobs while I took photos. 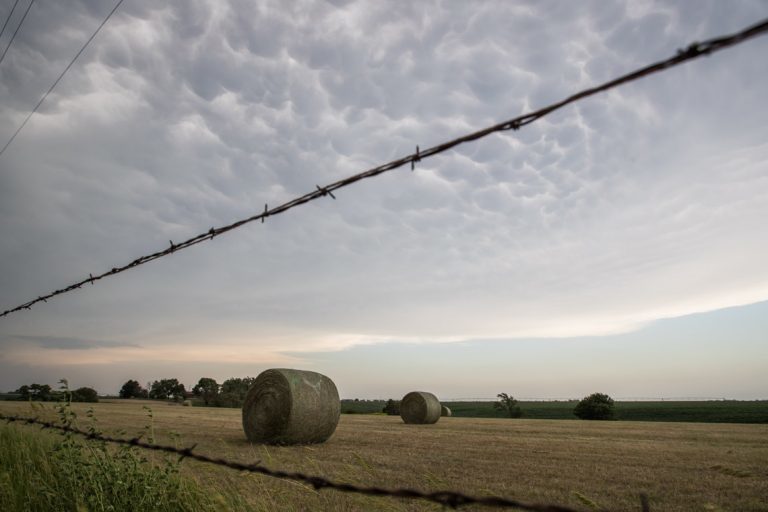 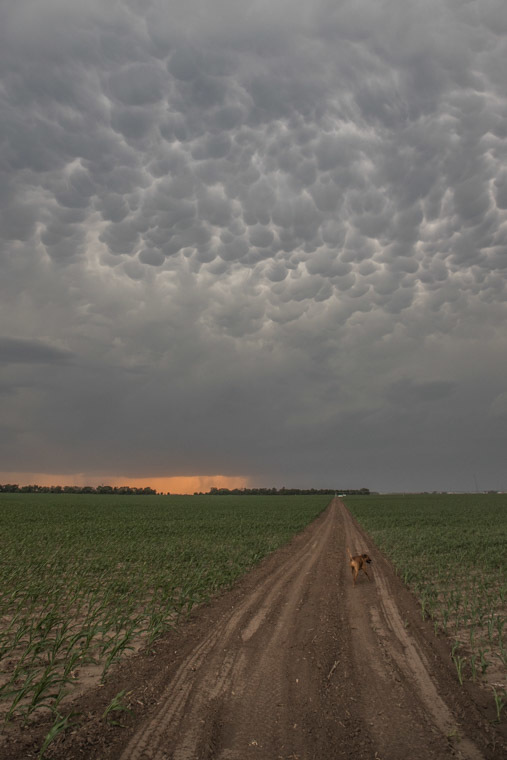 Occasionally, I saw ground strikes in the distance. As a lightning lover, I spent half an hour taking long exposures to capture a bolt. After many failed frames, the four second exposure below became my favorite shot of the afternoon. Usually my long exposure photos blur the motion of moving water but here, the orange bolt is sharply frozen while tall grass in the foreground sways in the wind. 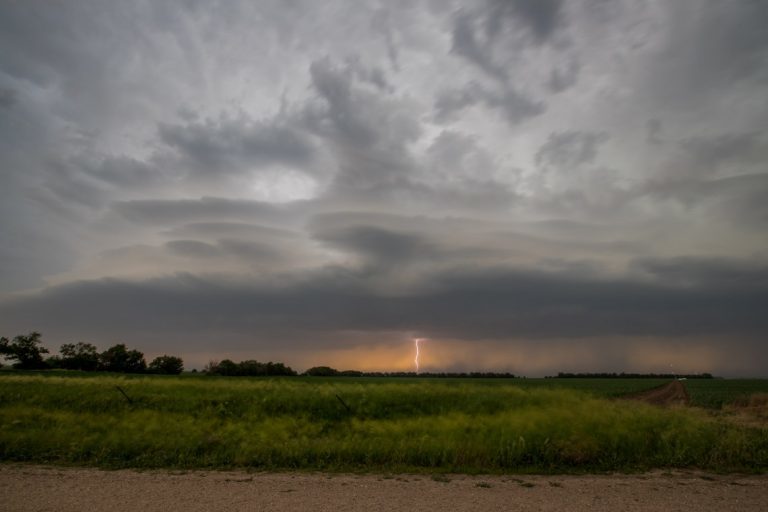 Lightning strike in the distance

As the storm continued, rain began falling in the distance. The sheet of water filtered the sun so well that I could look directly at it and photograph it without sunglasses. 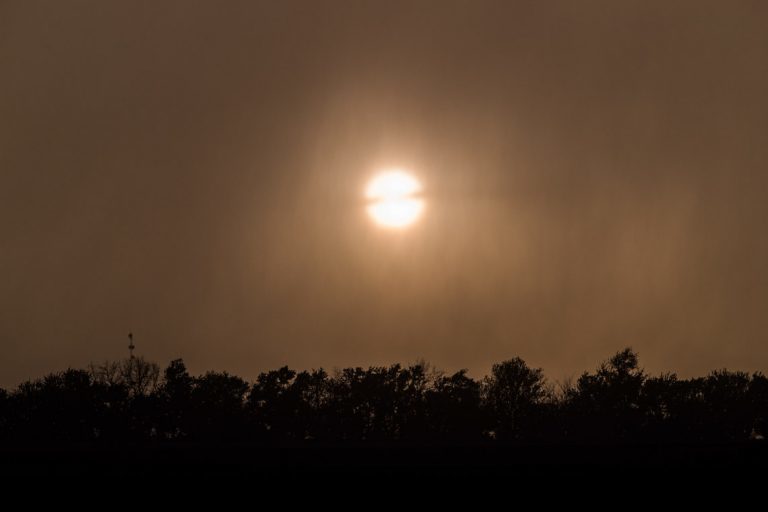 Setting sun seen through the rain

As the sun dropped, the entire landscape lit up in an eerie orange glow. Rain drops began to fall on us as the wind increased so I lead Japhy back to the car. Having witnessed a number of big storms in the midwest, my gut feeling told me I should probably get moving. But the experience – the colors, tones, shapes, and textures across the landscape – were far too perfect to leave unphotographed. 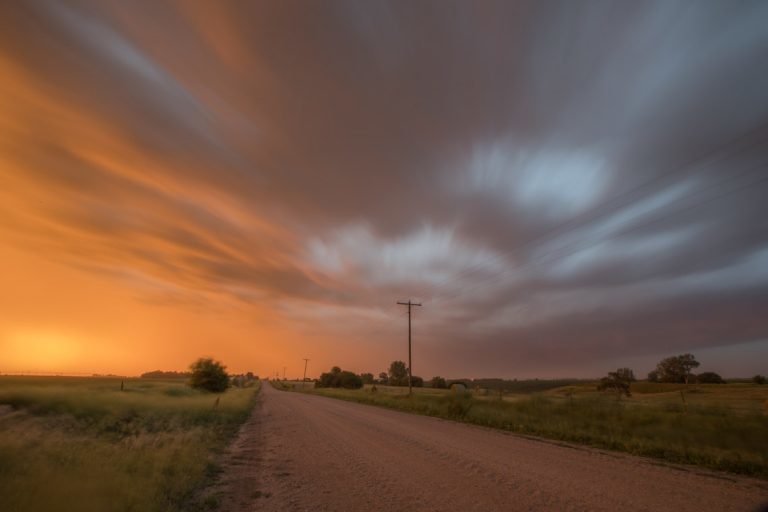 Orange glow across the landscape

By this stage of the storm, lightning began to strike much more frequently – not just in the clouds, but ground strikes close enough that I no longer felt as safe. The wind increased dramatically and dust mixed with last season’s corn husks tore across the fields and road. A raccoon sprinted  past me and took refuge in a small tree nearby. The photo above is the final shot I took from my unsheltered location…a 30 second exposure as the clouds moved quickly overhead – the left side ignited by the setting sun and the right side brighted from nearly constant lightning amid the clouds.

As I was setting up the shot, Japhy began barking from my car. If you’ve met Japhy before, you know he sometimes barks at random things. One time we were watching the sun set over the ocean in Rhode Island and he barked at waves in the distance. Another time, the maintenance guy – who Japhy adores – was doing some exterior work on my apartment. Japhy let the world know he was aware of the scraping and painting. Japhy is a tough guy sometimes, or so he thinks. But this instance was different. He was barking – increasingly aggressive – at me. He didn’t care about the tractor in the distance or the fence posts in the moving grass…but directly at me.  Japhy has never barked at me before in nearly two years of adventures together.

That final long exposure seemed like 30 minutes instead of 30 seconds as the proverbial shit hit the fan all around me. Huge raindrops slammed down and what I later learned were sustained 75 mph winds nearly knocked me over. The moment my camera’s shutter closed, I grabbed everything and ran back to the car, crouching as low as possible on the way. Camera, lens, tripod, rain cover, intervalometer…I threw it all in the front passenger seat and jumped in to find a very nervous Japhy wagging his tail and licking my face. I have no doubt he was warning me of the impending danger. ‘Time to go’ was overdue as we sped down the road. The strong wind broadsiding my car made driving in the loose gravel pretty gnarly, and I was legitimately worried about hail, tornadoes, or being blown into the ditch at this point. I sped back to the same gas station I began at, peering through windshield wipers that couldn’t keep up with the downpour, and took shelter under the awning of an abandoned drive thru. The sunset in the distance was a beautiful mix of purple and orange with the periodic light blue flash of lightning, and we were once again relatively safe as the storm passed overhead. 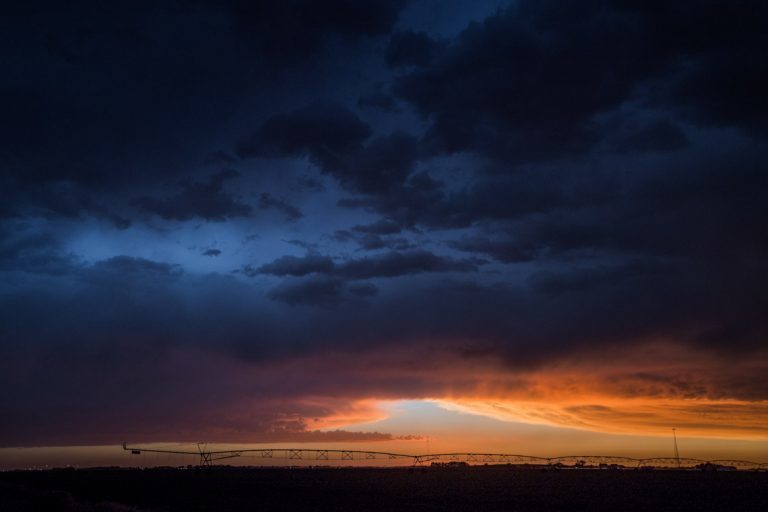 Local radio stations reported on damages caused by the storm just east of me. Tennis ball-sized hail wrecked cars and crops, a lightning strike burned down a house, and at least one barn was leveled by the strong wind. Dangers aside, this storm was one of my best photographic outings to date. I’m thankful Japhy was there to warn me, though. I was so mesmerized by the epicness of the moment surrounding me that it was easy to throw caution to the wind because I felt so truly alive in that setting…but Japhy’s sharp voice from the car caused me to snap back to reality, and not a moment too soon. Thanks, Adventure Pup. You truly are this man’s best friend and I’m excited for where the road will take us!